Lately we have made some minor changes and bug fixes—most of them requested and detected by you. This is the list of changes, grouped by the application sections.

Repetitive tasks can remain inactive in the Tickler File until a number of days before the date they are scheduled. This way, you are not distracted by stuff you still don’t need to worry about. Previously, they could be activated, at most, the day before. Now we have added the possibility that a routine can be activated the same day it’s been scheduled: 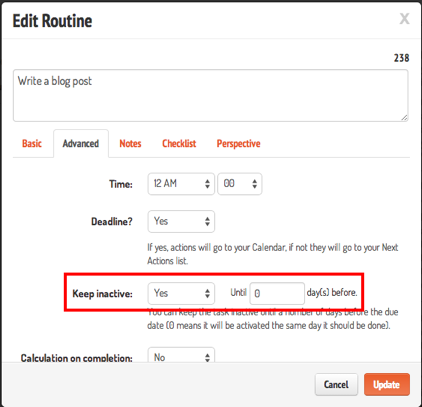 We have also fixed an error that occurred in the calculation of the next date in some cases where the Calculation start date parameter was used (advanced options).

If you are processing a note coming from Evernote, you can now have access to the original note at the same time. This way, you can make the necessary changes in the organization of your Evernote notebooks.

Now the dates of the items that are in the Waiting For list are always editable, even if the task has been really delegated. You can use them as reminders to follow up these tasks.

If you work with external partners to FacileThings (those to whom you delegate tasks by email), they are now allowed to continue accessing the delegated tasks, even if they are already completed.

We have also fixed a bug that occurred when a comment on a task exceeded 200 characters.

Now you can remove the due date of a project: 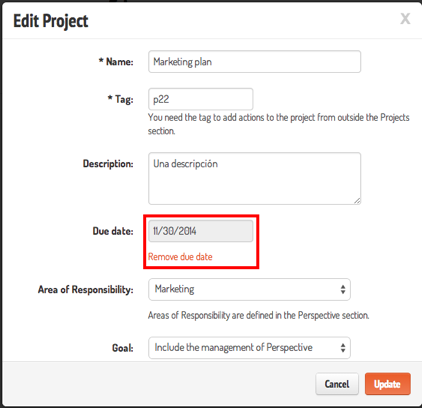 We have also solved a crash that occurred if you included quotes (") in the name of a project. The same error occurred when quotes were included in the names of goals and areas of responsibility.

We have included the most-used tags tool in the edit stuff form: 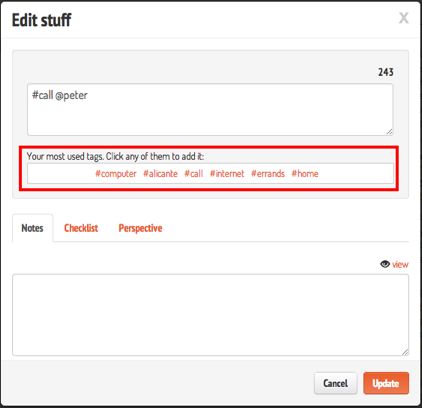 We have fixed a bug that occurred when printing a list that was filtered by person (an empty list was always printed).

We have fixed two errors here, both at the stage of Process: the notes associated with the action were not shown, and the act of processing was not recorded for statistical use in the Analytics section.

Being able to activate a routine the same day it is scheduled is a nice addition. Having at least one day is sometime more than necessary. Thanks!

Being able to activate a routine the same day it is scheduled is a nice addition. Having at least one day is sometime more than necessary. Thanks!