Improvements and new design in the Routines section

This weekend we have published a new version of the FacileThings Routines section, where you can define the tasks and events that take place on a regular basis.

The new design should be familiar to you, as it consistently follows the line of the sections we’ve already redesigned, with a menu on the left that allows you to select the routines according to the frequency with which you have programmed them: daily, weekly, monthly and yearly .

The main area, on the right, contains the list of routines of the selected type, in which you can see two interesting novelties: 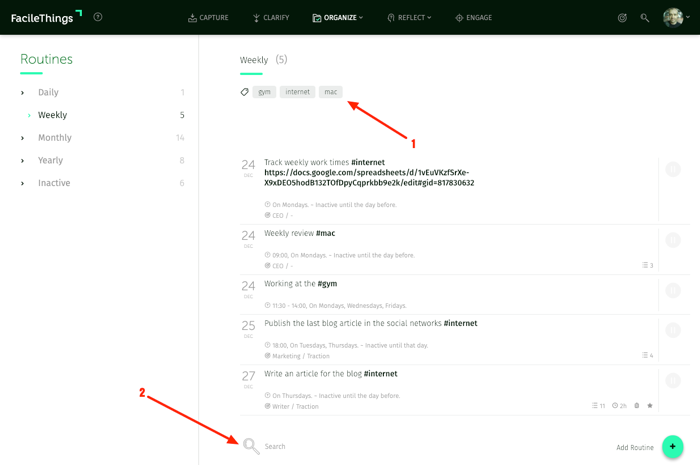 When you click on a routine in the list, the new Routine Editor opens, allowing you to see all the routine information and its options in one place, with a structure very similar to the Task Editor. 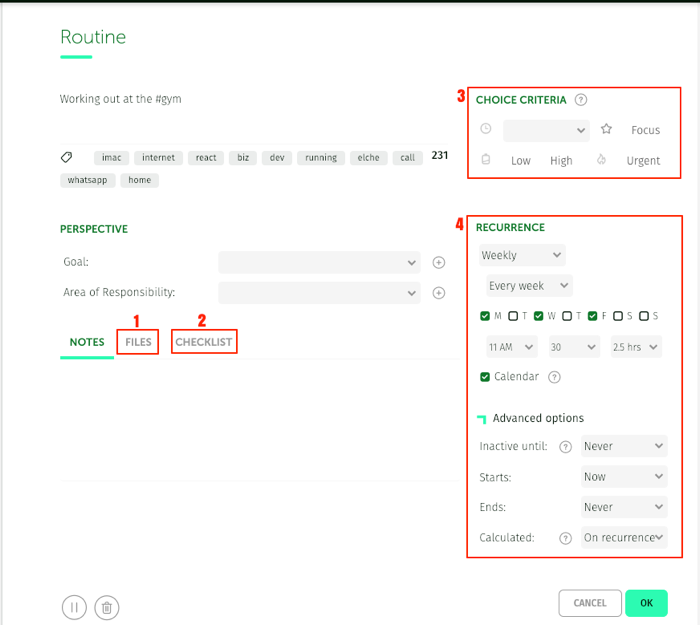 In addition to having all the information together, there are some new options:

Another novelty is that now, when you edit a routine and save the changes, the next occurrence will not be generated again, unless some data has been modified within the Recurrence area. If you only modify data that does not affect the programming of the routine (description, notes, choice criteria, etc.), the current active action will not be modified, and the new info will be effective when the next ocurrence is generated.

The routines programming has been completely rebuilt, with the dual objective of making it more intuitive for the user and improving the performance of the system.

The programming of daily and yearly routines do not have new options with respect to the previous version, but the weekly and monthly do:

If the Calendar option is checked, the actions generated by the routine will go to the Calendar. In this case, the “choice criteria” are deactivated because they do not make sense in actions that belong to the Calendar — following the GTD method, in the Calendar there must be only actions that have to be done on a certain day. No matter how energetic you are or how little free time you have, you’ll have to do them.

If you uncheck the Calendar option, the generated actions will go to the Next Actions list. In this case, the time and duration of the event are deactivated since they are not used in that list.

Commented about 4 years ago Michael Potter

The Routines feature looks amazing. I look forward to trying them out!

The Routines feature looks amazing. I look forward to trying them out!

Commented about 4 years ago Steve Parker

Fantastic revision of this feature. Can't wait to try it!

Fantastic revision of this feature. Can't wait to try it!