In any project that requires some creativity—as any endeavor—it’s necessary to switch from time to time between acting and reflecting. Sometimes you have to shutdown, stop doing things, think of what you’ve done so far and discuss what should be the next steps to follow.

In FacileThings we have dedicated the month of December to make a full big-picture review. We’ve reviewed and analyzed a lot of data to see how we can improve the lives of our users for the next year, while we maintain our vision of developing a personal productivity tool based 100% on the GTD methodology.

For this, a very important source of data comes from a survey we conducted among our customers in late November 1. Below I show you the results of the survey, along with some conclusions and our development plan for 2015.

(1) How would you describe your level of knowledge and use of GTD when you started using FacileThings? 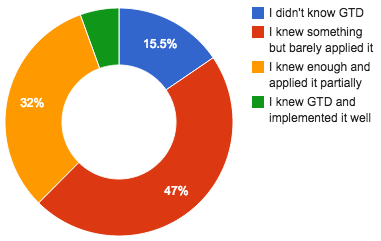 Most respondents (79%) knew something of GTD, but did not apply it or only partially. Only 15% knew nothing about GTD, which contrasts with the survey we did over a year ago, in which this group represented 47% of the total. It seems that now, our users know more about GTD.

(2) What is the primary benefit that you have received from FacileThings?

Although it is an open question, we have tried to group the benefits mentioned in more manageable concepts, and these are the results: 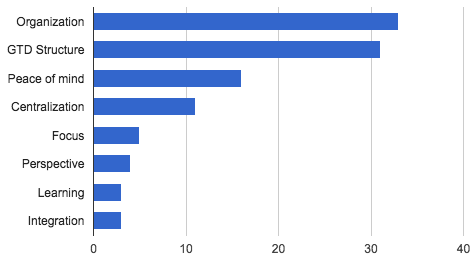 Other benefits mentioned to a lesser extent are:

(3) What was the first moment you realized you wanted to keep using FacileThings? 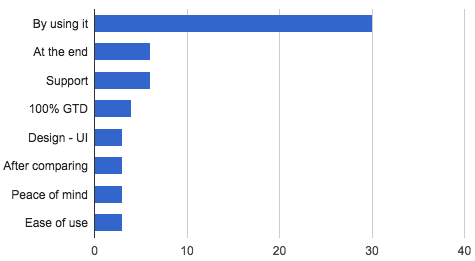 (4) Have you recommended FacileThings to anyone? 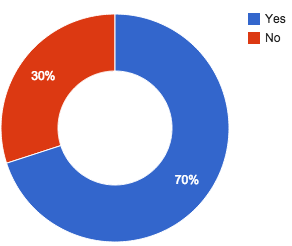 70% of respondents have ever recommended to someone the use of FacileThings, and have described it in the following ways:

(5) How can we improve FacileThings to better meet your needs? 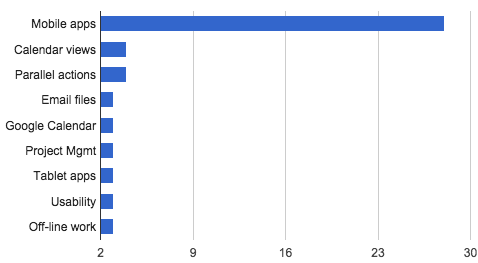 There are a myriad of different responses here (more than 60), but the top of the list—improving the mobile apps—wins by an absolute majority. Then there are a few very interesting improvements that are often mentioned. And finally, a long tail of very specific improvements (mentioned by one or two users) that are not included in this list.

(6) How did you discover FacileThings? 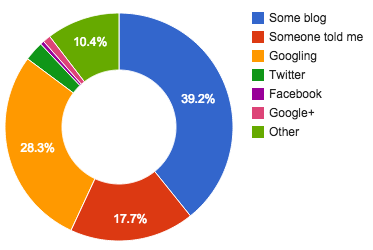 Most have found us by a reference in a blog or our own blog (39.2%), or surfing on the internet (28.3%). Also word-of-mouth has been its influence: A 17.7% tried FacileThings because someone recommended it.

(7) In what business sector do you work and what is your position? 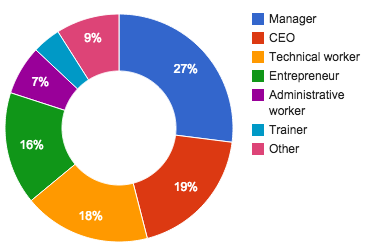 27% of our users have a responsible role in their company and 19% are running a company.

19% of them belongs to the Information Technology sector, followed by 9% dedicated to Consulting/Training.

The most common occupations are computer programmer (7%), consultant (4%), and project manager (4%).

In addition to this survey, we have considered another type of feedback that we receive from our users: support tickets, emails where they tell us the reasons they stopped using FacileThings, etc.

Also, of course, we have considered other analytical business indicators such as ratios of acquisition, retention and customer conversion. Making money is not our first objective, but it is necessary in order to continue on the way towards our vision.

Finally, there are external imperatives that we will force us to make some changes, some of legal nature and others of technical nature.

In all, these are the projects that we should rush—and what you can expect from FacileThings—in 2015:

We are developing a new mobile application from scratch. It will have a new design and a synchronization mechanism that will allow you to work off-line. The aim is to create a useful, fast and very easy-to-use application.

Initially, the application will be a downloadable app for Android and iPhone, and will be accessible through the browser to other platforms.

The idea is to complete a first beta version in the coming weeks, with a basic but robust functionality, and keep increasing its possibilities every month.

These are the next concrete developments we have planned for the web application:

In addition, we will work continuously in these topics:

So far we have not worried too much about marketing issues. This year we will pay greater attention to this section, because we believe that it will help us achieve our goals in a more sustainable way.

We will completely redesign the website, adapting it for use in tablets and smartphones. Also we will completely renew the blog, making it more accessible and readable, and adding new features to facilitate the location of content.

According to our supplier, the platform on which we have installed the application, blog and website will be obsolete in June 2015. This forces us to migrate to a new platform.

It will be a good change because the performance of the system will improve significantly and we will have more capacity for growth. However, it will be a difficult migration because it involves updating the versions of programming framework (Rails), the programming language (Ruby) and all the third party components we are using. We will have to review thousands of lines of code and thoroughly test each functionality. We will use the month of February to undertake this project.

Once the new system is working properly, we will plan the implementation of a secure connection protocol (https).

Along this year, we will also publish an API for developers and a referral program for our clients.

As side projects, and provided that the other projects give us some room, we will work on the design of a new user interface and begin to develop a specific application for iPad.

There are no deadlines (personally, I hate deadlines), although there are dates scheduled for everything. I will not show them because priorities (and therefore also the forecast dates) tend to change quite often (I do not like raising false expectations).

We would like to do many more things, but given our current resources, I think this is a realistic approach that, on the other hand, will get us quite closer to where we want to be. 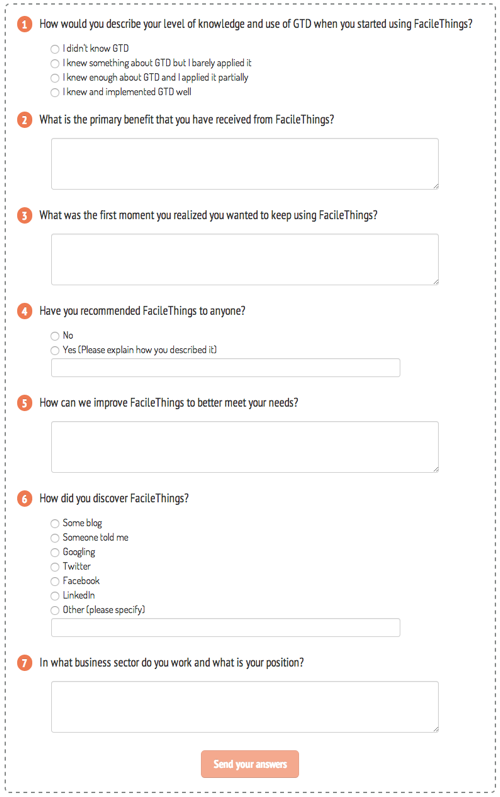 Commented over 7 years ago Isaac Mann

I hope to realize the first six things listed under Benefits to their fullest. I love the idea of bidirectional integration of GCal. I would also agree that the apps improvement would help greatly as I don't use it that much at this point based on the fact that I don't like to use it. I often wish I could use it more though and would if it was better.

I hope to realize the first six things listed under Benefits to their fullest. I love the idea of bidirectional integration of GCal. I would also agree that the apps improvement would help greatly as I don't use it that much at this point based on the fact that I don't like to use it. I often wish I could use it more though and would if it was better.

Thanks Isaac for your support and involvement.

Thanks Isaac for your support and involvement.

Commented over 7 years ago Larry Earl

I like the "next concrete developments". For me file attachments in emails and ability to attach files to actions are a must for efficient handling of those items without having to find a reference material only attached to a project. Some items are not contained in projects.

I like the "next concrete developments". For me file attachments in emails and ability to attach files to actions are a must for efficient handling of those items without having to find a reference material only attached to a project. Some items are not contained in projects.

Hi Larry, you're not alone there. We'll follow (more or less) the order of that list in the developing process.

Hi Larry, you're not alone there. We'll follow (more or less) the order of that list in the developing process.

Personal goal: Hoping to improve implementation of the GTD methodology by using FacilThings!

Personal goal: Hoping to improve implementation of the GTD methodology by using FacilThings!